Look out, 2018: Many floral industry members are heading into the new year with high expectations. 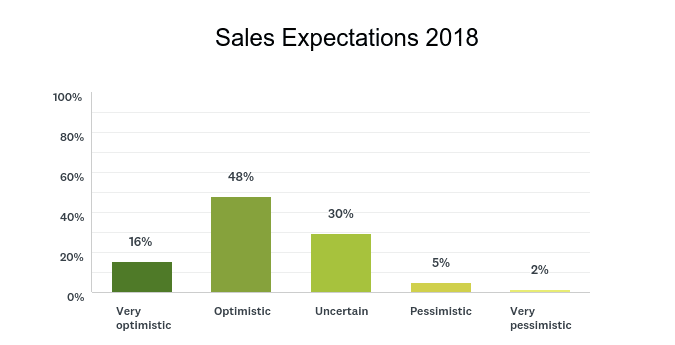 Among respondents, industry members in the South, growers, and those respondents with businesses in suburban locations appear to be most optimistic about sales expectations. Survey respondents included all segments of the industry — retailers, wholesalers/suppliers/importers and growers. (The vast majority of respondents were retailers.)

Even among those who expressed optimism for 2018, discipline and vigilance became constant themes — few industry members appear to be taking any sales or profit margins for granted.

“We are focusing on better measurements of margins and productivity, as we can no longer expect sustainability unless major changes are made,” explained one retailer in Illinois.

“I have tried to control cost of goods and really trim the number of items on my web site, yet still offering a nice variety,” said another retailer, in Kansas. “[We’re] also controlling payroll.”

Reaching out to new customers, and staying abreast of digital marketing trends, was another theme in write-in responses.

“We are investing heavily in SEO and other marketing and advertising,” said one florist in Oklahoma.

Looking at responses by geographic region:

Forty percent of respondents in the Midwest are “optimistic”— another 15 percent said they are “very optimistic.” Thirty-seven percent are “neutral/uncertain.” Remaining respondents are either “pessimistic” or “very pessimistic.” 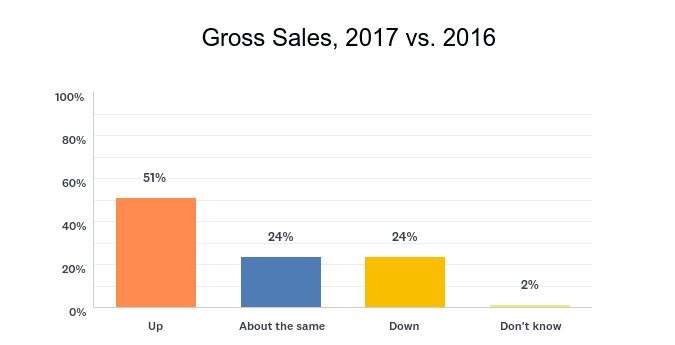 Respondents from Canada were split 50/50 between “optimistic” and “very optimistic.”

Seventy-one percent of respondents in the wholesaler/supplier/importer segment said they are “optimistic”; 14 percent said “very optimistic.”

Meanwhile, 39 percent of respondents who self-identified as urban locations said they are “optimistic”; 19 percent are very optimistic. In addition:

Sales Trends: Up for Many

Among those who saw gross sales drop, around 72 percent said the decrease was fairly small, between 1 and 10 percent. About 23 percent charted a steeper drop-off (11 to 20 percent). The remaining respondents said sales dropped by 21 percent or more.

Retailers said their average transaction is slightly more than $66.

Look for more coverage of survey results, including spending plans for 2018 and insight into the issues respondents are most concerned about and trends in buying and consumer demand of sustainably produced products and materials.

Does true love exist? These florists convinced us it does
Sedate a Plant, and It Seems to Lose Consciosness. Is It Conscious?