Watch Plants Light Up When They Get Attacked

Watch Plants Light Up When They Get Attacked

Scientists showed that plants are much less passive than they seem by revealing the secret workings of their threat communication systems.

Plants have no eyes, no ears, no mouth and no hands. They do not have a brain or a nervous system. Muscles? Forget them. They’re stuck where they started, soaking up the sun and sucking up nutrients from the soil. And yet, when something comes around to eat them, they sense it.

And they fight back. 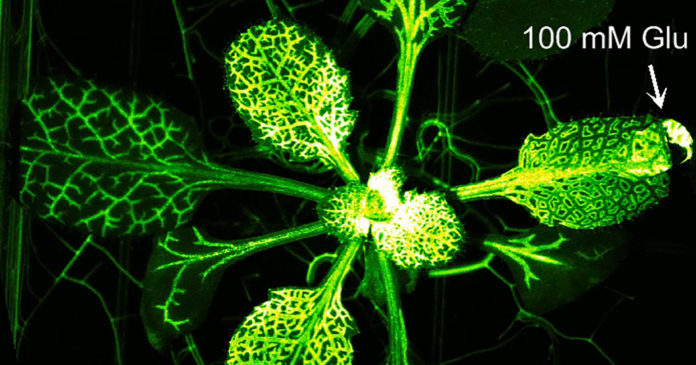 How is this possible?

“You’ve got to think like a vegetable now,” says Simon Gilroy, a botanist who studies how plants sense and respond to their environments at the University of Wisconsin-Madison.

“Plants are not green animals,” Dr. Gilroy says. “Plants are different, but sometimes they’re remarkably similar to how animals operate.”

To reveal the secret workings of a plant’s threat communication system for a study published Thursday in Science, Masatsugu Toyota(now a professor at Saitama University in Japan) and other researchers in Dr. Gilroy’s lab sent in munching caterpillars like in the video above. They also slashed leaves with scissors.

They applied glutamate, an important neurotransmitter that helps neurons communicate in animals. In these and about a dozen other videos, they used a glowing, green protein to trace calcium and accompanying chemical and electrical messages in the plant. And they watched beneath a microscope as warnings transited through the leafy green appendages, revealing that plants aren’t as passive as they seem.

The messages start at the point of attack, where glutamate initiates a wave of calcium that propagates through the plant’s veins, or plumbing system. The deluge turns on stress hormones and genetic switches that open plant arsenals and prepare the plant to ward off attackers — with no thought or movement.